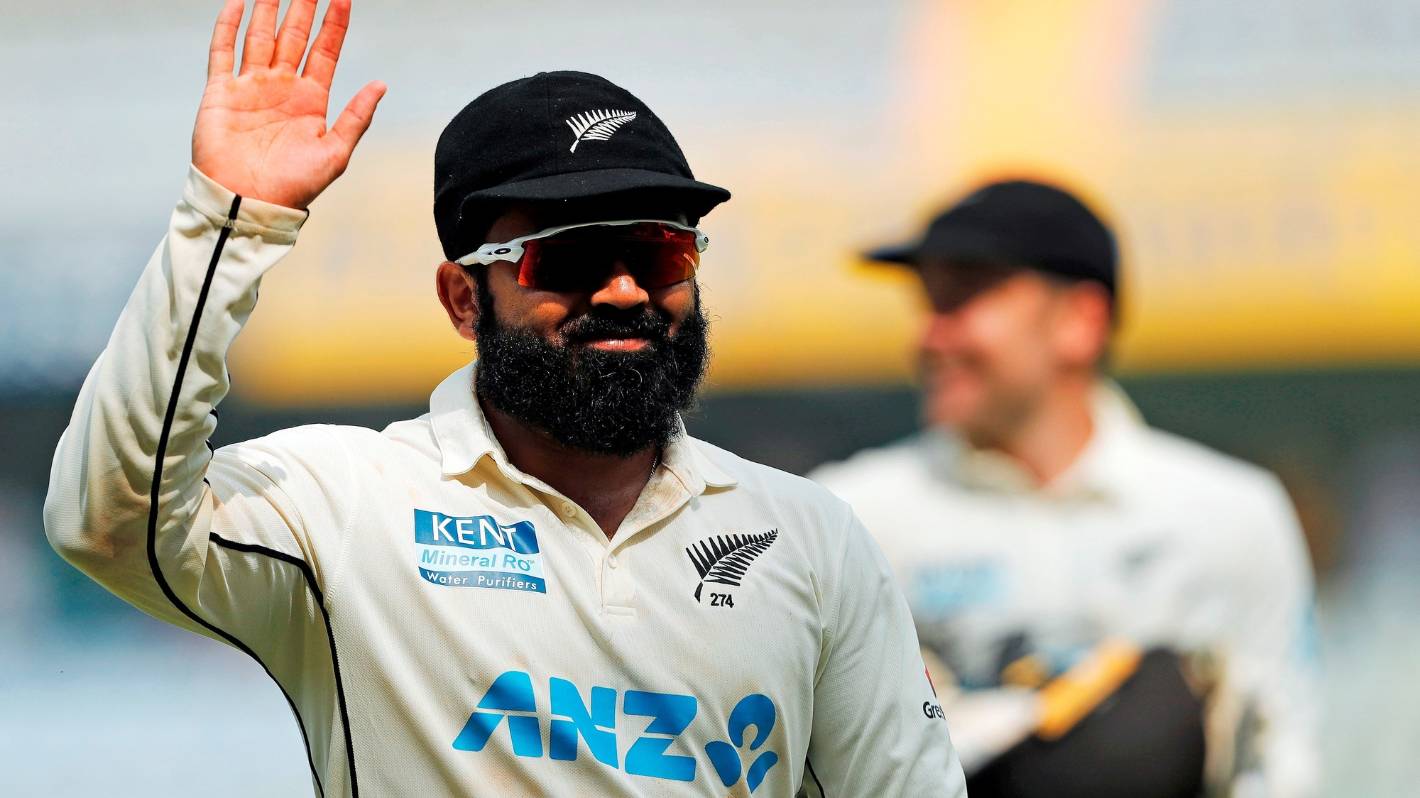 Ajaz Patel says the New Zealand cricketing community has been highly respectful of his Muslim faith and he looks forward to the day when Aotearoa’s stadiums have multi-faith prayer rooms.

The 33-year-old spin bowler – New Zealand’s first Muslim test cricketer – says his faith helps him deal with the disappointments of international cricket and also “the very highs of sport, which can also be little bit difficult to deal with, in a funny way as well.

“I’ve experienced both throughout my career. My faith has allowed me to keep a level head and be grateful for both sides of things.

“Where there’s disappointment, my faith allows me to look at it deeper and go ‘’what can I learn from this going forward’.

“In the same way, when there’s been success, I’m grateful to God that success has been bestowed on me, but at the same time realising that a lot of my success comes down to, one my hard work, but also the belief that God has a plan for me in this world, and I’m basically just living it really.’’

Hence when Patel became just the third bowler in test history to take all 10 wickets in an innings in Mumbai last December, he quickly glanced skyward to acknowledge his God.

But his thankfulness began before he joined England’s Jim Laker and India’s Anil Kumble in the record books.

“Even the night before, once I got back to the hotel I prayed and gave thanks for the wickets I’d received that day.’’

Soon after snaring the 10th and final wicket, Patel dropped to his knees to perform a sujud, a Muslim’s “way of acknowledging God and being thankful”.

“After I got my 10, I got into the changing sheds, had a shower and prayed and gave thanks.’’

Getting the 10 wickets was “a massive blessing’’ for the Mumbai-born bowler who came to New Zealand with his family, aged eight.

“I guess the whole background story around it, being in Mumbai of all places, it just somehow felt it was all fated, that it was just meant to be.’’

For Patel, it was important “to give thanks and absorb that moment’’.

Praying in the Black Caps dressing room or his hotel room has become a regular ritual for Patel, who took five wickets in the second innings on his test debut against Pakistan in 2018.

As a Muslim, he is “obliged to pray five times a day’’. Cricket’s demands mean the timing of his prayers can sometimes be tricky.

“I’m not going to lie to you and say I do all five prayers at the time given, but what I try to do once I get back to my hotel room is pray the prayers I’ve missed out on during the day.

“Our changing room is very accommodating. They all understand that’s one of the things I need to do. So if I do need to go away and do that for 10 minutes, everyone’s very accepting.

“I’m very grateful to be in an environment where I feel very comfortable about doing that.”

Ramadan – the ninth month of the Islamic calendar when Muslims undertake month-long fasting between dawn and sunset – can also be challenging during cricket assignments.

“Last year Ramadan started just before the season finished. I played my last game while I was fasting. If you’re travelling within Ramadan you don’t have to fast during that period so I could, potentially, have chosen not to fast.

“But, I felt comfortable doing it. It is a challenge, but it’s something that I enjoy as well. It’s one time, if I‘m honest with you, where I’m very particular about what I’m eating. I’m more in touch with my faith and more in touch with the charitable side of Ramadan.’’

Patel says he tries to get closer to God through prayers and read more of the Quran during Ramadan, which is “also a great moment to reflect on all the luxuries that we do have – drinking water, food to eat, and not having to worry about those necessities”.

Practising his faith was made easier by having his wife, Nilofer, their daughter Hania and Patel’s mother Shahnaz and father Yunus in England for the recent tour.

He says when his “mind’s frantically thinking about many things … my wife is great at reminding me, ‘Have you prayed?’ It’s like a lightbulb moment.’’

At home in Auckland, Patel and his extended family try to get to the New Lynn Islamic Centre mosque every day.

Visiting the mosque hasn’t been as easy on tour during the Covid-19 pandemic, but he has had the opportunity to visit some of the most beautiful mosques in the world, including Sheik Zayed Mosque in Abu Dhabi.

He was heading to Turkey after the just-completed Black Caps tour of England because “I’ve heard a lot about the beautiful mosques and the Islamic history there’’.

One of his most memorable touring experiences came in Sri Lanka in 2019. “I said to the management that I needed to go to the mosque to fulfil a prayer obligation for the celebration of Eid [an official Muslim holiday]. But it was just after the unfortunate attacks in Sri Lanka on the churches, so it was quite a high-risk time.’’

Management told Patel he couldn’t go by himself because it was potentially unsafe and they were concerned that sending security staff with him might draw attention to him.

“They said, ‘we don’t think it’s a good idea, but let us talk to the Iman and see what we can do’.

“The Iman agreed to come to the hotel and led the prayer for me in the morning in my hotel room. I never expected that or thought it could be a possibility. It was just an amazing moment for me to go, ‘Look, where there’s a will, God creates a way’.

“I’ve had a few incidents like that where I’ve sat back gone, ‘Wow, what an amazing thing, and it’s just really strengthened my resolve.’’

As the first Muslim in the New Zealand team, he had to initially educate people around, ‘this is my faith, this is why I do this’.”

He hopes he’s made it easier for the next person.

But he says there has been plenty of respect from his team-mates and management.

They know that, as a Muslim, he cannot drink so when the team celebrates a victory by uncorking a bottle of champagne, Patel’s needs are also met.

“Generally, the management will make sure if they are bringing alcohol into the changing room, there’s some soft drinks or something else to accompany that, so that I have something to drink.

“I still socialise with the guys. I still feel very much a part of the whole team and the environment. I’ve had guys who have gone out themselves and got me something [to drink] because they felt there wasn’t anything for me.

“It’s a very respectful environment. That, to some degree, is our nature as New Zealanders, that we are very welcoming, open and humble and accepting of people’s faiths.’’

For example, when Australia beat England to clinch the Ashes series last season, they were on the brink of opening bottles of champagne to spray when batter Usman Khawaja ran away from the team huddle.

“The other seniors in the team said to put the bottles away and Khawaja came back,’’ Patel said.

“That was a powerful image to Muslims around the world. It showed a lot of respect from those boys to go, ‘We’ve got a Muslim in our team, let’s respect that and put the bottles aside’.’’

Patel saw England do the same thing when “I hate to say it they won the one-day World Cup,… well they didn’t win they drew”. He watched Eoin Morgan and his England team show their respect for Adil Rashid and Moeen Ali.

Patel was proud of New Zealanders’ empathy for the Muslim community after the “massive, massive tragedy’’ of the mosque shootings in Christchurch in 2019 where a gunman killed 51 Muslims at prayer.

“I was quite shocked, it happened so close to the [Hagley Park] cricket venue [where the Black Caps were to play Bangladesh]. I had just come back from Friday prayers in Auckland, and I remember sitting there, watching on television. It ran through my head that if I was in that squad I could potentially have been in the [Al Noor] mosque at the same time.’’

Patel found the response, “not only from the Prime Minister, but everyone in the community, was quite amazing and quite beautiful. I think it brought us closer as a country. I think a lot of people looked at lot more into what Islam was all about and what the Muslim faith is all about, it educated a lot more people.

“It’s sad to say that a tragedy was what it took for that to happen, but at the same time it certainly has opened a lot of people’s eyes to the fact we need to be more inclusive, to know more about multi faiths and about other people’s cultures. That was a massive turning point.’’

He also found it touching when “all the women decided to go out in headscarves in support and solidarity of Muslim women’’.

“That was very emotionally strong for me. I got to the airport and saw one kind young girl wearing a headscarf. I walked up to her and said, ‘thank you very much. I was quite emotional because my mum walks out in a headscarf every day. She’s never felt uncomfortable, but knowing that there’s that solidarity and people have that respect back home in New Zealand is very, very special.’’

Patel looks forward to a time when New Zealand sports grounds have “multifaith prayer rooms” like he’s seen elsewhere in the world.

“We have them at airports now, we’re starting to grow in that facet, so it would be nice to see more of the grounds have a room where anyone could use the facility to pray when and where they need.’’

He says it wouldn’t take much – just a quiet space to pray and reflect. “For the Muslim faith, doing wudu, or ablutions before prayer is essential, so all we’d need is some kind of sink or basin that we can do in to cleanse ourselves and just a room to pray in.

“I think it would be beneficial for all faiths, especially when we’re trying to attract everyone to come and join sport.’’

Patel says he doesn’t “personally go out to be a role model’’, but he hopes “if someone sees me following my faith it gives them the hope to continue to be themselves.

“That’s regardless of whether they’re of the Muslim, Hindu or Christian faiths, it’s something I hope people are comfortable doing.”

“As sports people we can sometimes get so drawn into the world of sport, professionalism and pressures … that it can be very hard to escape it.

“Religion and faith really helps sportspeople like myself to walk away from that, and go, ‘that’s OK because sport is not everything’.

“There is more to life than just sport.”

When his cricket commitment allows, Patel hopes to fulfil “a lifelong goal’’ and make a pilgrimage to Mecca in Saudi Arabia, the holiest city for the Islamic faith.