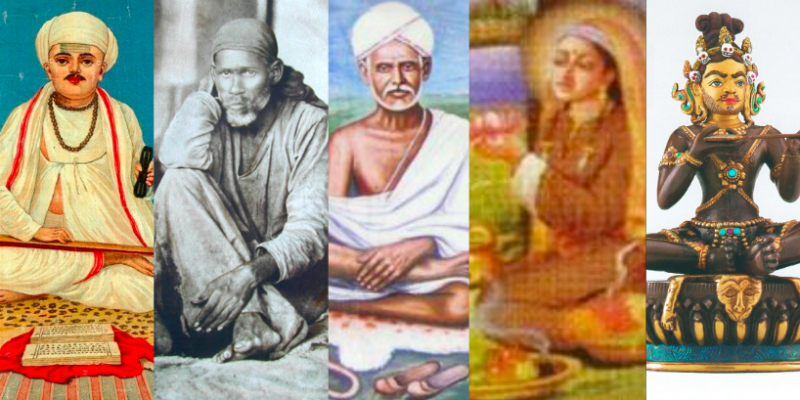 Hundreds of years after his death, the Sai Baba of Shirdi (1838-1918) remains one of the most widely revered saints. He is worshipped by millions of Hindus, Muslims and others. Born to Hindu parents and brought up by a fakir, he was a harsh critic of religious orthodoxy and detested the Hindu-Muslim divide. He believed that the central message of both Hinduism and Islam was love, service and freedom.

Another saint who attracted both Muslims and Hindus was Kabir (1398-1448/55). He was born to or adopted by a Muslim family of weavers and so he was well acquainted with Islam. But going by his evergreen poems, it appears he had an intimate knowledge and understanding of Hindu thought and mythology too. He was critical of religious orthodoxy and authoritarianism and chided Hindus and Muslims alike.

Contrary to what is widely believed, India’s spiritual story is not all about Brahmanical beliefs, debates and disputes about Sanskrit literature, Upanishads and the Gita or even the caste system.

According to author Mukunda Rao, the spiritual strivings that were non-Vedic in origin and character outnumbered Vedic forms. And some of the best known mystics attempted to bridge the divide between Hinduism and Islam.

So much so that one cannot pinpoint and assert any one idea as ‘Indian philosophy’. Rather, Rao says, Indian thought needed to be understood in plural terms. It included not only Hindu, Buddhist, Jain and Sikh ideas but also Christian and Islamic one.

Indeed, some of this might sound blasphemous in today’s India.

Sarahapada (100-200 CE) was a maverick mystic philosopher who made fun of monks for their practice of renunciation, questioned Vedic authority and challenged the dominant narratives of his time. His teachings were even considered irreverent and subversive. “If nudity can earn liberation, then dogs and foxes are most eligible,” he preached. Yet, curiously, he was later revered as a mahasiddha, a siddha of siddhas and a Great Brahmana.

Abhinavgupta (950-1016) was a Shavaite sage and considered an earthly incarnation of the fearsome Bhairava. He was one of the greatest philosophers, mystics, writers and visionaries of India. He said that for spiritual pursuit, one only had to be pure at heart and serious; it did not matter if one was a monk or householder, a Brahmin or even an outcast. In his time, this was a revolutionary concept.

One of the most respected philosophers born in this country was Basavanna (1136-96) who was distressed at and critical of the religious scriptures and practices built on and around the Brahmanical traditions. He challenged and rejected Brahman orthodoxy, the caste system and gender discrimination. He also rejected the spiritual authority of the Vedas. His new cult of Shiva worship later came to be called Lingayatism. He argued against caste discrimination among Shiva devotees; it was deemed essential to dine together, a practice which came to be called dasoha, akin to the langar in Sikh temples.

Allama Prabhu (circa 1100), a wandering monk, a mystic poet and a maverick sage all rolled into one, also rejected Vedic tradition and questioned and ridiculed image worship, the caste system, religious customs and rituals.

India produced women saints too, some of who, like their male counterparts, were well known and some not so well known.

One of the most revered women saints was Akka Mahadevi (1130-60), who once came to Allama Prabhu and Basavanna completely naked. Rao says she was the ultimate archetypal quester who moved beyond all binaries. Today, Akka Mahadevi is a household name In Karnataka, with roads and universities named after her. Would she have the freedom to do today what she achieved then?

Lalleshwari (1320-92), born near Srinagar, was Lalla Arifa to Muslims and Lalla Yogishwari to Hindus. She became a wandering monk. Indifferent to social strictures, like Akka Mahadevi, she walked nude, singing and dancing in a state of ecstasy.

Nandanar (700-800) from Thanjavur in Tamil Nadu was a great Shiva devotee born into the Pulaiya caste, who were considered untouchables. Today, however, Nandanar is worshipped as a great saint in many Shiva temples.

Tukaram (1608-50) may be one of India’s most popular saints but he too had to face brazen discrimination from the Brahmin community who initially refused to accept his spiritual appeal. Ravidas (born 1371) was a gentle and compassionate sage but he also rejected the authority of the Vedas and the supposed spiritual power of the Brahmins. And not all the Brahmins of Varanasi liked the rendering of the Sanskrit Ramayana in Awadhi by Tulsidas (born 1600).

The life and teachings of Sankardev (1449-1568) make him one of the most significant chapters in India’s cultural and religious history. He was a scholar, saint, playwright, artist and social reformer. He taught that God resided in all humans. And in a major departure from the times he lived, he initiated people of all kinds – shudras, tribals, even Muslims.

Shishunala Sharifa (1819-89) was a poet and saint at home both with Islam and Hindu philosophy. He was a shining example of the great hermeneutical tradition of India which transcends religious identity. He was born to a Qadri who was a Shiva devotee. Sharifa went to a school where he learnt Lingayat tradition, the Ramayana, the Mahabharata and the Puranas. The orthodox Brahmins hated him. On July 3, 1889, to the chanting of Shiva mantras, Sharifa offered his body to the earth; Muslims recited lines from the Quran while Hindus chanted verses from the Vedas. Sharifa’s tomb at Shishuvinahala in Karnataka is now visited by both Hindus and Muslims.

Sufiism is an aspect or a mystical dimension of Islam and not a sect of Islam, Rao underlines. One of its greatest finds, Nizamuddin Auliya (1238-1325) initiated people from other faiths into the Chisti order without converting them into Islam.

Bulleh Shah’s (1680-1758) genuine belief in Prophet Mohammad did not prevent him from appreciating and learning other spiritualities and even enunciating Hindu mysticism in his approach to salvation.

These are only some representative examples from a thoroughly-researched book. But this much is enough to know the eclectic Hindu religion our sages believed in; in their thought process, there was no room for anger, lust, greed or hatred.