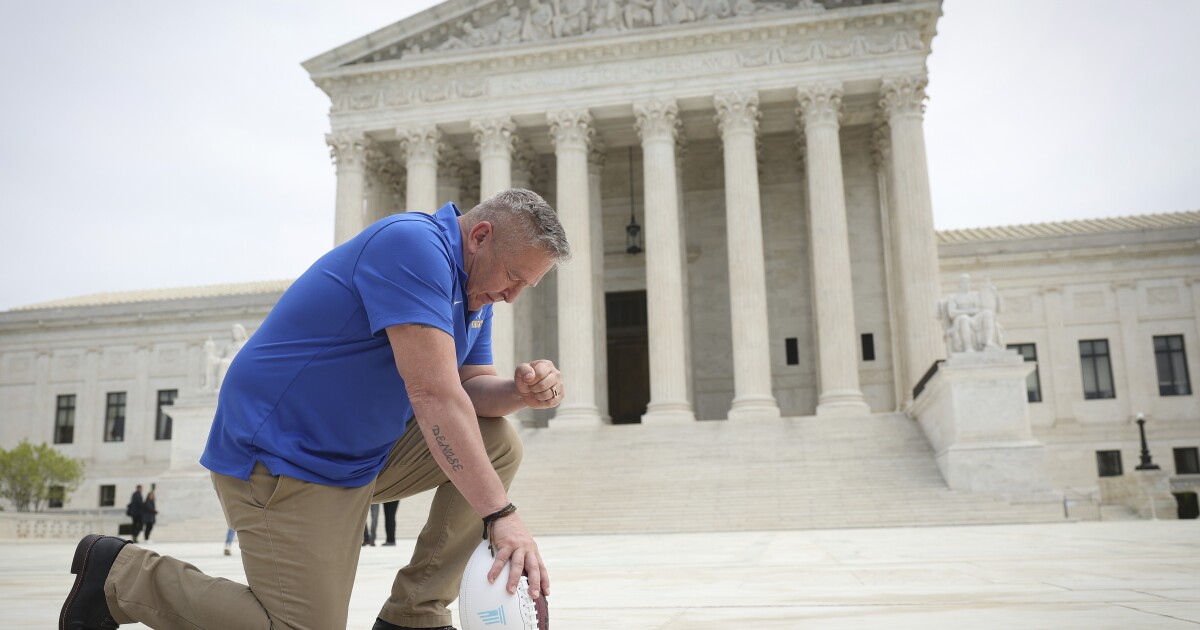 To the editor: I am a proud graduate of Dorsey High School in Los Angeles, where I played basketball. There, I realized that the teachers and coaches were at the top of their fields and that if I listened to them, I could get into a top-notch university. I went on to get undergraduate and graduate degrees from USC and to be successful in my chosen profession of teaching and school administration.

That said, I am extremely disappointed that a Dorsey football coach — as mentioned in your editorial, “The Supreme Court ruling on school prayer deserves a big fat F” — leads prayers with his players. As someone of Jewish faith, I can only imagine what I would do if I were confronted with this conundrum: Would I join this coach in prayer, thus going against my faith, or would I give in so I would not risk offending the coach’s religious sensibilities?

A student-athlete should not have to make this agonizing decision.

To the editor: Does your editorial board know what the word “coercion” means? It is defined as, “The practice of persuading someone to do something by using force or threats.”

Force or threats? Where in the Supreme Court decision siding with football coach Joe Kennedy does it say anyone will be forced to pray? At least be honest.

To the editor: Those who push to demolish the venerable wall separating church and state are fond of positing that our Constitution does not forbid mention of religion in public schools.

They ardently oppose any mention of the role religion played in discriminating against Blacks for centuries. The same goes for how white Christian nationalists sanctimoniously bore crosses and prayed before lynching captive Black men and women.

Then, when a school offers yoga instruction, Christian conservatives are quick to cry foul, claiming that it promotes the Hindu religion. The Times reported such an instance as recently as 2012.

Doesn’t the Bible rebuke hypocrites? It seems our democracy is becoming ever more nominal, what with theocratic conservatives’ shameless hypocrisy.

To the editor: You know who else would disapprove of praying in the middle of a football field? Jesus Christ, for one.

From Mathew Chapter 6: “And when you pray, do not be like the hypocrites. For they love to pray standing in the synagogues and on the street corners to be seen by men…. But when you pray, go into your inner room, shut your door, and pray to your Father, who is unseen.”

The good Christian justices of the Supreme Court should be ashamed of themselves.