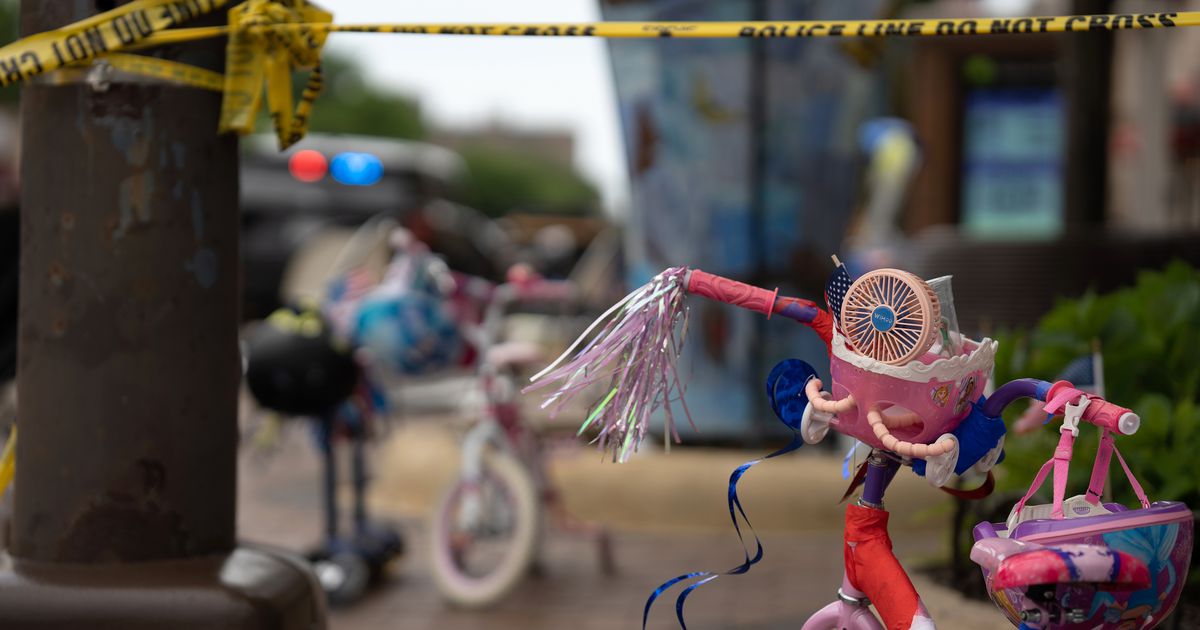 Activities once considered normal are now plagued by fear thanks to the gun culture.

Bicycles remain along the sidewalk after parade-goers fled Downtown Highland Park, Ill., a Chicago suburb, after a mass shooting at a Fourth of July parade on Monday, July 4, 2022. (Mary Mathis/The New York Times)

Guns. I have written often about guns, always arguing for more sensible gun laws. Based on experience, here’s what will happen when this article is published:

By 9 a.m., copies will be sent to National Rifle Association headquarters.

By 11 a.m., copies will be distributed by NRA to representatives in every state, along with suggestions for rebuttal and mail addresses for The Tribune.

The NRA’s propaganda machine is powerful and effective. So, too, is the lobbying machine it uses to keep elected non-representatives from doing their duty. The organization makes significant cash contributions to “friendly” campaign funds, but the real power is in convincing candidates to fear that gun owners will vote against them if they don’t hew to NRA positions. More propaganda.

Over the years, I learned that citizens who object to sensible gun control are good people. They have simply been misled by a persistent propaganda machine. That machine is funded primarily by those who manufacture, promote and sell guns.

But no matter what NRA propaganda may say, the facts are clear. First, no civilian, no hunter, no gun owner needs or should have an assault rifle or magazines holding more than a dozen bullets. We outlawed automatic rifles once before. It saved lives. But NRA propaganda killed that ban – resulting in needless deaths of dozens of school children and others.

Second, there is zero evidence that having more guns makes any of us safer. On the contrary, experience proves that more guns bring more deaths.

Third, the deadliest weapons are pistols. They kill more Americans than any other weapon. And yet, gun manufacturers make and sell enough pistols for every man, woman, and child. (The operative word is “sold” – an active verb, not a passive activity.)

Fourth, many gun murders, including suicides, are impulsive acts. The perpetrator has an urge to harm himself or others, buys a gun, and quickly satisfies the urge.

But like many harmful urges the impulse to inflict pain fades over time. That’s one reason background checks and other delaying tactics save lives.

Fourth, the Second Amendment does not include a “blank check” for gun ownership. Quite the opposite. It talks about a “well-regulated militia,” not groups of self-appointed trouble-makers out to re-shape society according to their own narrow, misinformed, anti-democratic fantasies. And no citizen can legally buy a cannon or a machine gun.

Fifth, hoping mental health programs will solve the problem is nonsense – like hoping driver education will eliminate highway fatalities. Both are important but not sufficient.

Some of the most damaging results of NRA pro-gun propaganda are societal changes. Today, small children in school are taught to fear for their lives – thanks to our gun culture.

Today, government officials, business leaders, elected representatives, judges and even church leaders are unable to interact with citizens because of security guards and limited movement.

Today, shopping at malls, department stores and supermarkets carries risks that did not exist before the proliferation of guns.

In other words, activities once considered normal and care-free are now plagued by fear, thanks to our casual, propaganda-driven acceptance of gun ownership.

It’s time for elected leaders to care less about their own ego-driven political futures and more about safety for their constituents.

Long-time Utah journalist Don Gale is not against guns. He is against propaganda-driven foolishness about gun policies.